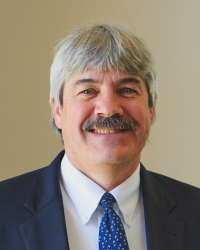 Warren Davenport, along with his wife, Lisa, became members of the Forest Hill church in 2006 when they moved to the Memphis area. They are not a couple who comes in making a whole lot of noise, but, rather, quietly, go about seeking to assist the work in whatever capacity, including teaching classes. Married since 1981, Warren and Lisa are the parents of two grown children, a daughter, Julie, and a son, Paul. Julie is married to MSOP graduate and Forest Hill deacon, Robert Berch.

Warren retired as Chief Financial Officer at Universal Asset Management, Inc. in 2019 and is a licensed CPA. He enjoys automobile mechanics, gardening, reading, computers, Pittsburgh Penguins hockey, and spending time with his grandsons. Warren was appointed an elder of the congregation in 2016. He is eminently qualified, having already served as an elder of a congregation while living and working in New Jersey. Because of his vast background in finance and accounting, he is an invaluable asset to this congregation with regard to financial matters, which is an important aspect of any sizable congregation.