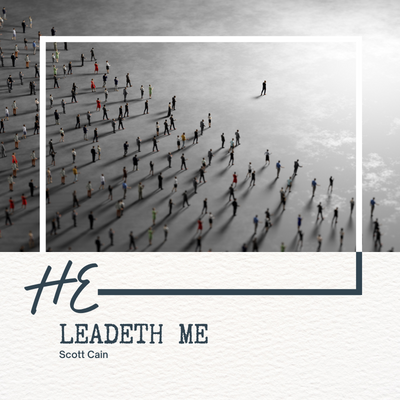 All men need God’s leadership. Without it, men are doomed: “There is a way which seemeth right unto a man, but the end thereof are the ways of death” (Proverbs 14:12). “O Lord, I know that the way of man is not in himself: it is not in man that walketh to direct his steps” (Jeremiah 10:23).

All men need God’s leadership, but only some men want it and sincerely plead with Him for it. “Lead me, O Lord, in Thy righteousness because of mine enemies; make Thy way straight before my face” (Psalm 5:8). “Lead me in Thy truth, and teach me: for Thou art the God of my salvation; on Thee do I wait all the day” (Psalm 25:5).

“He leadeth me.” “He” is the Lord, the God of heaven. What is “He” doing? “He” is a Shepherd, and “He” is leading: guiding the steps, directing the path, and showing the way. Whom does “He” lead? “Me.” “He leadeth me.” His constant guidance and direction are available to “me.” His path, His steps, and His way can be followed by “me.” “Me,” a mere mortal man whose way is not within him and who is unable to direct his own steps. The Almighty Creator extends His guidance and direction to… “me.”

But will I follow? Will I submit to His leadership, direction, and guidance, or will I, like so many others, try to forge my own way?

“He leadeth me.” The soul who truly mirrors this submission from the ancient Psalm will likewise mirror the sentiment of the modern song: “He leadeth me, O blessed thought…”

What-e’er I do, where’er I be, Still ‘tis God’s hand that leadeth me.

The thought is indeed a blessed and comforting one. To think that whatever I do or wherever I be, God’s hand is there to lead me: will I take hold? Will I take hold of the hand that will lead me out of bondage to sin (Romans 6:13-18)? Will I follow the steps that lead me away from temptation (Matthew 6:13)?

God’s leadership is not dependent upon life’s tranquility: to the contrary, inner tranquility is dependent upon God’s leadership. Those who follow Him can expect outer trials (2 Timothy 3:12), but God always provides a way to overcome (1 Corinthians 13:10). The Shepherd leads His sheep in peaceful paths with still waters and in pure paths of righteousness (Psalm 23:2-3).

Lord, I would clasp Thy hand in mine, Nor ever murmur nor repine;

Content whatever lot I see, Since ‘tis Thy hand that leadeth me.

Paul connected God’s goodness with His patience and longsuffering, then declared that “the goodness of God leadeth thee to repentance” (Romans 2:4). Since repentance is a change of mind that leads to a change of life (2 Corinthians 7:10), it can rightly be said that God’s goodness changes the hearts and minds of men.

And when my task on earth is done, When by Thy grace the vict’ry’s won,

E’en death’s cold wave I will not flee, Since God thro’ Jordan leadeth me. From the beginning of the creation, God gave man a task. Adam was to dress the garden and keep it, Noah was to build an ark, Moses was to lead a nation, David was to rule a nation, and Solomon was to build a temple. God has work for His people to do.

Even Jesus had work to do. His task involved winning souls: “For the Son of Man is come to seek and to save that which was lost” (Luke 19:10). He gave the same task to those who follow Him, commanding His apostles to go teach others to observe all that He had commanded, which included the command to teach (Matthew 28:18-20). “Go ye into all the world and preach to Gospel to every creature” (Mark 16:15). Jesus’ standing orders are for His people to reach the lost, so saints ought indeed to be praying, “Lead me to some soul today.”

When “He leadeth me,” I can say with David, “Yea, though I walk through the valley of the shadow of death, I will fear no evil: for Thou art with me” (Psalm 23:4). There will be a time when the work for God’s people is done. Yes, there is much work to do here and few laborers to do it (Matthew 9:37-38), but when this life is over, God has a place of rest for them that are His (Revelation 14:13). As one preacher said, “Heaven is called a place of rest, because God expects us to be tired when we get there.”

His faithful follower I would be, for by His hand He leadeth me.

There was a man who knew about Calvary and the church. He despised both and persecuted the church with unsurpassed zeal. He was utterly convinced of the righteousness of his cause until he journeyed down that Damascus road. This man needed the light of Christ to knock him off of his feet and blind his eyes before he would open his mind, realize his errors, and be converted to Jesus. After that, this man who would be known as Paul had an unsurpassed zeal for Christ. Have you let God lead you down that Damascus road? You’re sincere, but are you converted?

Can you honestly say, “He leadeth me”? “Leadeth” not only denotes a current action but a continuous one. Can you truly say that He is leading and will continue to lead you, for this implies that you are following and will continue to follow Him? Have you truly allowed Him to lead you in prior days? Is He truly leading you today? Do you truly intend to be led by Him tomorrow, and throughout the remainder of your days?