Our worship services include congregational singing of psalms, hymns, and spiritual songs (Ephesians 5:19). Several prayers are offered to God as well (Acts 2:42). Communion is observed by partaking of unleavened bread and fruit of the vine (1 Corinthians 11:23-29). Members make a financial offering for the poor and the spread of the gospel (1 Corinthians 16:1-2). Guests are not expected to give. Then one of our many trained preachers delivers a sermon from the Bible. All are encouraged to bring their Bibles and follow along (2 Timothy 2:15). At the sermon’s end, the Lord’s invitation is offered (Matthew 11:28-30) for any who want to become Christians or rededicate their lives to God. The service lasts about an hour. Guests may sit silently in the service, or they may participate. 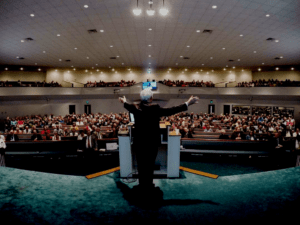 In the fall of 1958, the elders of Getwell church of Christ saw the newly developing area south of Nonconnah Creek and east of Getwell, then in the county, as a promising location for a new congregation. Brother and sister J.M. Mincey, members at Getwell, owned almost four acres of land on Knight Arnold Road, on which was situated their frame house, a barn, and a chicken house. This property was made available and was purchased by the Getwell elders. Brother E.L. Whitaker, Jr., who was a member at Getwell and a part-time preacher, was selected as the preacher, and he remained in that capacity for the following 33 years. Several families volunteered to move to Knight Arnold in order to form the nucleus of the new congregation. The first task at hand was to convert the buildings into church facilities. This was done at night and on weekends, and soon the former Mincey residence was a “church house,” and the chicken house was made into classrooms. There was a spirit of togetherness and love such as can come only from a new work such as this, with its attendants “roughing it” and some inconvenience. In two or three months, it became apparent that more room was needed in the frame building, so the amateur carpenters in the congregation got busy again. Under the supervision of brother Leslie Shappley, an elder at Getwell, the old Mincey house at the west end was enlarged, giving more auditorium space with wings at each end and expanding the seating capacity to about 175. The congregation continued to grow during the 1970s, soaring to above 500 in membership. During this time, attendance for Vacation Bible School, held each summer, would soar to above 400. Knight Arnold/Forest Hill has always placed much emphasis upon the Bible. It recognizes the need for training gospel preachers, and in 1968, the Memphis School of Preaching moved from the Getwell congregation to Knight Arnold. It continues to this day with over 1,000 men having been trained to faithfully and effectively preach God’s word.

The Knight Arnold/Forest Hill congregation has always been known for its liberal and sacrificial giving. In addition to investing in the school of preaching, the church supports the following ongoing mission works: Far East/World Evangelism; Good News Today; Gospel Broadcasting Network; House to House/Heart to Heart; Kakinada, India; Four Seas Bible College; Truth For the World; Apologetics Press and Escula Biblica En Linea. Throughout the late 1980s and early 1990s, the congregation’s membership began to decline. A location more conducive to growth was found in Southeast Shelby County. The congregation relocated to its present facility in January 1998. Presently the congregation is served by seven elders: Danny Braddock Jr., Tony Callahan, Warren Davenport, Greg Mangrum, Harold Mangrum, Keith McAlister, and Eddie F. Ray III. Five preachers have served as pulpit evangelists: E.L. Whitaker, Jr. (1959-1992), Steve Ellis (1992-2000), Barry Grider (2000-2018), Mark Reynolds (2019-2021) and Scott Cain (present). With God’s blessings, we know that Forest Hill will continue to prosper and pray that you will join us in our work for the Lord.