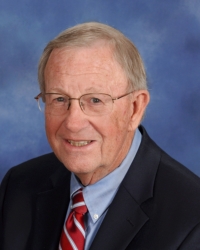 Harold D. Mangrum has been a member of Forest Hill since 1968, having been baptized by our late evangelist, E.L. Whitaker, Jr. He served for several years as a deacon of the congregation before being appointed to the eldership. Harold and his wife, Carol, married in June of 1961. They have two sons, Greg, who is also a Forest Hill elder, and Scott, who is, likewise, a faithful member of the Lord’s church. They also have four grandchildren.

Brother Mangrum is an attorney, along with his son, Greg. He supervises the visitation program for the congregation.