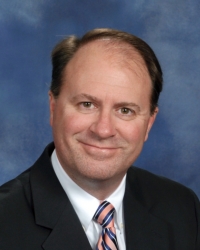 Greg Mangrum “grew up” in this congregation. He was baptized early in life during a Knight Arnold gospel meeting with V.P. Black. He became a deacon of the congregation in the mid 1990s. In 2008 he became an elder. Greg received his education at Memphis Harding Academy, Harding University, and Memphis State University (now the University of Memphis) School of Law. He is a practicing attorney, along with his dad, elder Harold Mangrum. Greg and his wife, Christa, have been married since 1987. They are blessed with two lovely Christian daughters, Greer, a middle school teacher, and Chase, a student at Harding University.